The star of this film has one of the great names in cinema history. Combined with the fact that she is an English actress, her future has no limits. 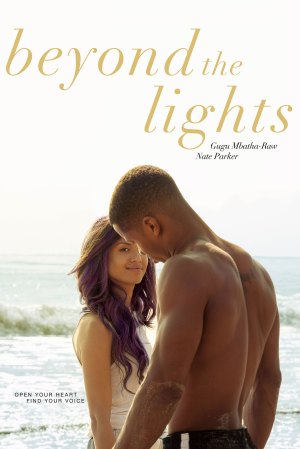 While this is a quality, entertaining film, Beyond the Lights contains a masterful performance by Ms. Gugu Mbatha-Raw. As demonstrated in this year’s Belle, she is both beautiful and talented, and it is impossible to take your eyes off of her.

Here, she plays a budding rap super star named Noni, a singer who is forced to confront a sexually exploited image. Involved in a regrettable relationship with her co-star, Kid Culprit, she finds herself contemplating suicide while sitting on a balcony outside of her hotel room.

Rescued from certain death by Kaz (Nate Parker), a stand-in security guard stationed in the hall outside of her door, a relationship obviously is formed that builds throughout the entire film. It has both strengths and weaknesses, yet every time you feel that the movie is devolving into some hokey love story it reaches up and captures your hardened heart.

While Mr. Parker is quite capable playing Kaz, a college graduate who wants to get politically involved, it is Ms. Mbatha-Raw who dances on the edge of stardom. She is both sympathetic and endearing, not to mention proving that she is a great singer. At times you feel you are watching a young Beyoncé trying to define her talent as something other than simply a sexual object.

The film is also enormously helped by performances from Machine Gun Kelly, Minnie Driver and Danny Glover. Mr. Kelly is perfect as Kid Culprit, an overly tattooed rapper who at times resembles Eminem. Mr. Glover appears as Kaz’s father, a police officer with a sense of humor who simply wants to see his son succeed.

However, it is the performance by Ms. Driver as Macy Jean, Noni’s hard-driving mother, who steals the movie. A white English woman with a black daughter, she directs Noni’s life more as a Marine Staff Sergeant businesswoman than a mother. She is simply sensational.

Like this year’s Dear White People, Beyond the Lights has flown under the public’s radar screen, playing mostly in theaters that attract a larger black audience. That is regrettable, as both films are significant for separate reasons.

Writer/Director Gina Prince-Bythewood has brought us a provocative, meaningful film about a young woman trying to simply choose her own path to recognition and success. In reality, this film is tailor-made for young women and their mothers, as it describes a hard road for all women no matter what the color of your skin may be.

← The Theory of Everything
Rosewater →