Here is the one thing about Interstellar that I know for sure.  Given that it lasts 2 hours 49 minutes, take a trip to the bathroom before finding a seat. 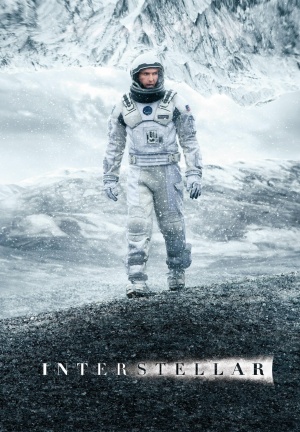 Though I saw this film at the IMAX in downtown Indianapolis on Wednesday, November 5, I had to wait 24 hours before attempting a review.  How do you describe a film that incorporates Einstein’s theory of relatively with a spectacular trip in space through a wormhole in the attempt to save the few remaining people left on an Earth?

How can you love a film that continually overwhelms you?  What if a father has to leave his family for a space trip where he may never return?  What if the space trip is based in part on a theory of quantum mechanics where every hour spent on a distant planet results in humans on Earth aging 7 years?

In a sense, this film has the same spiritual magnificence of Stanley Kubrick’s 2001; A Space Odyssey (1968).  The cinematography and special effects were key elements in Kubrick’s script, and the same thing applies to Christopher Nolan’s Interstellar.

I suspect that the film will prove to be memorable for a host of reasons.  Matthew McConaughey plays a guy called Cooper, a widower living with his father-in-law (John Lithgow) and two young children.  The Earth has been turned into the functional equivalent of the 1930’s dustbowl, and the only food left capable of growing is corn.

Dust is everywhere, and Cooper’s young daughter (Murph) swears that ghosts exist in her room which are causing books to fall from the shelf.  This has meaning later in the film, and I will leave it for you to determine its significance.

Cooper and his daughter accidentally discover an existing military facility run by Professor Brand, played by Michael Caine in his sixth consecutive film directed by Mr. Nolan.  Cooper, being a former expert pilot, agrees to take charge of a spaceship designed to fly through a wormhole near Saturn with the hope of finding other planets capable of sustaining human life.

The bulk of the film involves this space flight, where Cooper is accompanied by four crew members.  While they are all good in small roles, it is Anne Hathaway who again stands out as Amelia.  She is the daughter of Professor Brand, and she has a secret goal in trying to locate a previous space traveler who navigated the wormhole.

It is ironic that our crew encounter adventures that are as intellectually stimulating as anything you will see in an “action film” Unfortunately, that is the films strengths and weaknesses.

For example, the meaning and definition of love confront both Ms. Hathaway and Mr. McConaughey in different fashions.  While Ms. Hathaway is finally forced to reveal an emotional attachment as supporting her wish to seek out a certain planet, McConaughey is left in a constant state of turmoil given the fact that his young daughter remains convinced that he has decided to abandon her.  Murph refuses any communication with him, and this proves to be crushing.

Despite the appearances of talented actors like Jessica Chastain and Matt Damon, their scenes become hard to grasp.  Damon is a former space traveler found on a planet that is completely covered by ice, and he quickly becomes a villain whose only goal is to find a way to return to Earth.

Ms. Chastain is always watchable and here she plays Murph at a much older age.  She is a scientist who must try and determine if her father has left any hints on how to save life on Earth.  When Cooper left for space, he left her a watch exactly like his, and that watch has kept on ticking in a fashion that will simply have to be seen to be believed.

While it was unfair to describe Interstellar as solely a film commingling time and space, it toils in that same area much like was done in Mr. Nolan’s Inception (2010).  In other words, if people on Earth age much faster than a space traveler spending time on a distant planet reached only through the wormhole, then is it possible to reverse that process by traveling in the opposite direction?   And even if you can get back to Earth, how old will your children be if you are able to see them again?

Mr. Nolan has never been a guy to dwell on humor, and you’ll find it here only when our space travelers are communicating with a helpful robot.  In other words, if you want to see McConaughey involved in something funny, then hunt down Jim Carrey’s hysterical imitation of him doing his Lincoln commercial on Youtube.

In the end, I still don’t know if I liked this film or was simply left buried under a cinematic avalanche.  Regardless, I know that it has to be seen at an IMAX if possible, as the cinematography by Hoyt Van Hoytema and the musical score by Hans Zimmer are critical additional dimensions to feeling the emotional effect of the film.

Let me simply say that I am left with the impression that I need to see the film a second time to try to come to grips with a number of moments that I didn’t understand. Unfortunately,  I don’t know if I have the patience to endure it.