If you are wondering why Dracula keeps being interpreted on the silver screen, remember that he only appears in dark movie theaters. I wonder why? 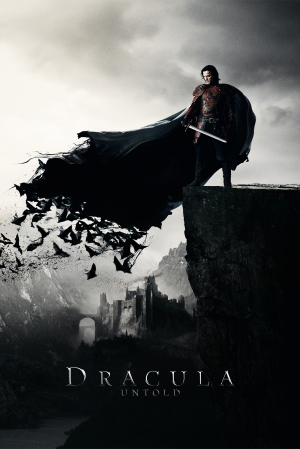 I have always been attracted to vampire movies, and that is particularly true when they center on Dracula. In a sense, he is sort of a satanic version of Donald Trump. However, instead of using money and bad hair to seduce women, he simply bites them in the neck and withdraws a bit of their blood. Unfortunately, you can rid the world of Dracula by driving a stake through his heart, while The Donald lives on.

I saw Dracula Untold at the IMAX with my new Saudi foreign exchange student, and I’ve got to say that it was rather entertaining despite its expected shortcomings. While the special effects won’t translate to a TV at home, the cinematography by John Schwartzman keeps you involved in the film’s underlying story.

In this case, Luke Evans plays Vlad Tepes, the ruler of a small kingdom that is about to be overrun by the hideous Turks in the 15th century. It seems that the Turkish Sultan has a policy of having Vlad’s kingdom hand over a thousand of their male youths for Turkish military training, and Vlad is determined not to let his own unfortunate experience be repeated. This film will not be praised in Istanbul.

In the process, he stumbles across a hideous vampire-like creature inhabiting a mountain cave, and it seems that the only way he can conquer the Turks is to drink the vampire’s blood and become one himself. While he will have the powers of Dracula, he can only avoid becoming a permanent creature of darkness if he can resist consuming blood for the next three days.

Evans’ Vlad proves to be a tormented version of Captain America. Married to a beautiful woman played by Sarah Gadon, his task becomes increasingly difficult as he is forced to both avoid the sunlight and an increasing desire to knock down a shot of human blood. On the other hand, there are some hot sexual encounters between Vlad and his Mrs., proving that vampires don’t need Viagra.

Adding a great deal of zest to the film is Dominic Cooper, who plays Mehmed, the Turkish Sultan. He is one nasty SOB, and he quickly learns that Vlad’s weakness was the same as Ron Wilson of the Rolling Stones, namely facing the morning sun after spending the night bingeing on either Turkish troops or booze and drugs.

This film has a few interesting twists, which characterizes the really good Dracula movies. It all began with Bela Lugosi playing Dracula in the film released in 1931. No one has ever looked more sinister playing that role.

It’s been followed over two hundred other versions, but let me point out a few. To begin with, see if you can hunt down Abbott and Costello Meet Frankenstein (1948). Mr. Lugosi again appears as Dracula, and the film is an idiotic treat.

Furthermore, a scary version was released by Director Werner Herzog in 1979 entitled Nosferatu the Vampyre. Klaus Kinski rivals Mr. Lugosi as the classic Dracula, and it reinvents the original story first told in the novel released by Bram Stoker in 1897.

Finally, two other recent vampire movies that are worth seeing are Fright Night (2011) and Only Lovers Left Alive (2013). In Fright Night, you have Colin Farrell playing our blood-loving villain, with Toni Collette and Anton Yelchin making mighty contributions. I recently reviewed Only Lovers Left Alive, and Tilda Swinton and Tom Hiddleston play sexy vampires who are fighting boredom while Anton Yelchin again appears.

Sure, I don’t deny that some of you may leave the theater thinking, “Christ, why did I listen to Hammerle?”, but at least I walk in the darkness without fear. Do you?