Rating: If the Catholic Church is going to condemn anything, it might start with its recent past. 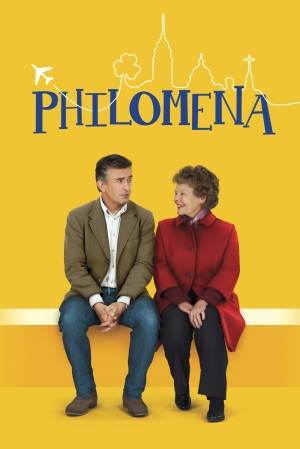 Initially, we see Philomena when she was but an Irish teenager in the early 1950’s. After a brief sexual encounter with a young stranger, she becomes pregnant and is assigned to a Catholic girls school so she can quietly and silently give birth to her child.

What follows is an indescribable tale that unashamedly indicts the Roman Catholic Church. Having given birth under the nuns’ care, she is confined for four years of virtual slavery in their laundry facility as payment. Count on sobbing – repeatedly.

In the process, she is allowed to see her young son for one hour a day, eventually suffering inconsolable torment when he is adopted without her consent. It seems that the good nuns running this “House of Horrors” were literally selling young children to wealthy Americans, making a handsome profit in the name of our Lord and Savior.

Fifty years later we see Ms. Dench hook-up with Mr. Sixsmith, a struggling journalist, hoping he could help her find her lost child. He is as critical of the Catholic Church as Ms. Dench is supportive, and the two gradually form a friendship that is inspiring. This is Mr. Coogan’s most complete role to date.

While I won’t give it away, the previews show that their journey takes them to the United States, where Ms. Dench continues to pursue some type of contact with the child she has never forgotten. Our two comrades struggle as they both nearly lose hope.

What transpires is a reaffirmation of the nature of human existence. Additionally, the Catholic Church is fully revealed for its brutal intolerance that mocks their religious principles.

Like Mr. Coogan’s character, I also served mass when I was attending a Catholic grade school, and I still remember how I was taught that eating meat on Friday was a mortal sin. In other words, if you ate a hot dog and then were killed by a car while walking home, your soul would be condemned to Hell for eternity. Sweet dreams were poisoned.

Again like Mr. Sixsmith, I also have stopped attending religious services. I can’t forget the fraud perpetrated on me and my colleagues when I was young, and I am not about to support their condemnable rejection of women to serve as priests, much less their stand on homosexuals and contraceptives.

Watching Ms. Dench try to maintain her dignity while struggling to find a missing son shamefully taken from her by Catholic nuns 50 years earlier, you get to honor her as an actress in a profession that nears its end. Her eyesight is clearly failing, yet she embraces a character whose nightmare becomes your own.

Pope Francis should require all cardinals to watch this film when they next meet. The Church will benefit.

One thought on “Philomena”