Rating: Blue Jasmine is a film that treats human depression as an attribute. While there is no one you will like, did I say there are some spectacular performances? 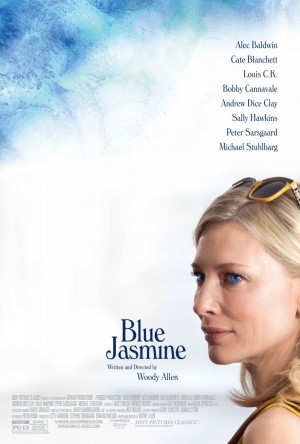 All people change with age, so it would be unfair to be too critical of  Woody Allen. Unfortunately, while he is still as ornery as ever as he nears his 78th birthday in December, he lost his comic flair long ago.

As a New York City icon, his movies are nearly always praised by local reviewers. While I don’t deny that he should be honored for his many artistic accomplishments, he remains an unfortunate sleazy SOB for running off with Mia Farrow’s adopted daughter. Though he fits into the category of his New York colleagues Elliott Spitzer and Anthony Weiner, at least they confined their dalliances to prostitutes and female airheads on the internet.

Unfortunately, Mr. Allen’s films seem to reflect his sense of misery and desperation. While most of the performances in his films are borderline brilliant, they almost always center on adults in failed personal relationships. On the other hand, who knows that tormented territory better than him?

With Blue Jasmine, Kate Blanchett gives an Oscar-worthy performance as Jasmine, a woman riding a personal rocket ship filled with depression. Once a wealthy socialite basking in the glow of her sleazy husband’s (Alec Baldwin) multimillions, she is left in a psychological basement following his arrest on multiple fraud charges.

Everything has disappeared for Jasmine, and she has been forced to travel to San Francisco to live with her working class sister,  Ginger. Never far from her next Xanax and vodka-filled martini, she now has to live in an environment that she once profoundly despised.

Again, Ms. Blanchett is devastatingly good as a fallen version of Mrs. Bernie Madoff. Though she is judgmental, rude and devoid of a single likeable attribute, she succeeds in commanding your attention despite the fact that you couldn’t care less what happens to her.

What saves the film is Sally Hawkins’ portrayal of Ginger, a decent woman still willing to help an undeserving fallen sister. Her prior marriage was ruined when Jasmine convinced them to invest all of their limited resources in one of her husband’s offshore business ventures, and she is left supporting herself while working at a local grocery store.

Ms. Hawkins provides the only breath of fresh air in this film filled with profoundly unlikeable people. She is a joy at every turn, and it is worth reminding you to hunt down her great performances in Layer Cake (2004); Happy-Go-Lucky (2008); Never Let Me Go and Made in Dagenham (both in 2010).

What probably says more about Woody Allen’s mental state than this movie is the fact that all of the male actors are dedicated pricks. Alec Baldwin, Ms. Blanchett’s husband, never met a dollar or someone else’s wife that he couldn’t steal. On top of that, Andrew Dice Clay appears as Ms. Hawkins’ ex-husband, a man forced into life’s ditch after trusting Baldwin and his schemes. He really is quite good in his role as a hardworking guy thrown into the gutter after being mesmerized by those living in opulent mansions.

In addition, Louis C.K., Bobby Cannavale and Peter Sarsgaard make contributions to Blue Jasmine that only add agony to everyone’s lives, including the audience. Louis C.K. attempts to seduce Ginger, succeeding for a short time while  hiding an unfortunate secret. Mr. Sarsgaard appears as a wealthy industrialist enthralled by Jasmine as she hides her past, and he appears to be little more than her next version of her first husband. Bobby Cannavale has his moments as the blue-collar guy who desperately courts Ginger while fighting Jasmine’s derision, and you end up liking him despite his short fuse.

Ironically, I remember a moment in Mr. Allen’s Stardust Memories (1980), where he had a character make fun of reviewers who could only remember his “funny movies”. I laughed at the time, because I considered him an artistic idol after such brilliant films as Bananas (1971); Everything You Always Wanted to Know About Sex (1972); Sleeper (1973); Love and Death (1975) and the great Annie Hall (1977). Sitting in the movies back then before one of his films began was a stimulating moment filled with wondrous anticipation.

And while he has occasionally hit the mark over the years, his remaining strength in the film industry comes with probing dissolving human relationships. Unfortunately, as with Blue Jasmine, his films have become mired in human contempt that leaves the audience feeling like a wooly mammoth trapped in a tar pit.

What’s worse, Mr. Allen doesn’t have the slightest understanding of the working stiffs of this or any other country. Living his narrow life in New York City, blue-collar people are left to resemble little more than loveable idiots. That problem reflects Allen’s lack of understanding, and I can only foolishly wish that he was still in love with Diane Keaton.