Rating: What if Osama bin Laden made funny home movies? Ben Kingsley is about to provide you with a walk through the devil’s park. 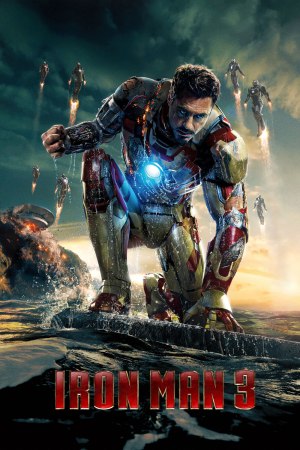 Iron Man 3 is the cinematic equivalent of going to a great restaurant only to have the steak overcooked. Sure, the salad and side dishes were superb, but I was forced to chew so long on the meat that I gradually lost interest.

Robert Downey, Jr. is spectacularly entertaining as Iron Man and yet brutally irritating as Tony Stark. Why Gwyneth Paltrow’s Pepper Potts wants to stay with him is as befuddling as Stark’s attraction to her. Fundamentally, they are both profoundly annoying.

On the other hand, I am a great admirer of Mr. Downey, and he saves the film with his interaction with a small boy and his discovery that the terrorist known as The Mandarin is not the reincarnation of Osama bin Laden. Downey’s scenes with the kid are as funny as they are politically incorrect, and he is at his best when allowed to embrace his comic genius.

While Mr. Downey is always watchable, it is Ben Kingsley’s role that brings a legendary twist that can’t be missed. Kingsley steals the film playing the international terrorist named above. Cold and chilling on the outside, he harbors a secret that will literally leave you in stitches. It’s a great performance by a great actor, and he should be remembered when Oscar season rolls around.

Furthermore, Guy Pearce again shines as a handsome, demented villain with absolutely no conscience. He evolves from a Zuckerberg-like youthful geek into a tormented scientist who has mastered the ability to manipulate the human brain. He stands out as much as he did as the hateful Charlie Rakes in last year’s underrated Lawless and as King Edward VIII, the British Monarch who gave up his throne to marry his divorced lover in the Oscar-winning The King’s Speech (2010).

As anticipated, the special effects are masterfully done. However, they go on and on, reaching the point where you’re left mumbling, “enough is enough!” Unfortunately, there were one too many Iron Men for my taste.

For all of its shortcomings, Iron Man 3‘s spectacular box office performance is a reflection of the talent of Robert Downey, Jr. When he was struggling with his drug addiction years ago that kept him on the sidelines, I laughingly urged Congress to pass legislation that would authorize him to use as many narcotics as he desired. After all, wouldn’t society be far better off seeing this brilliant actor on the screen as opposed to behind bars?

While Downey’s great performances have been recognized, you must not overlook the brilliance of his smaller films. Think of his gay brother in Home for the Holidays (1995) and his unforgettable performance as the young man who was trapped by his girlfriends in Two Girls and a Guy (1997). Then there were his extraordinary contributions to The Wonder Boys (2000), Kiss Kiss Bang Bang (2005) and Good Night, and Good Luck (2005).

In a sense, he is the literal reincarnation of the legendary Charlie Chaplin, a man he ironically played in Chaplin (1992).