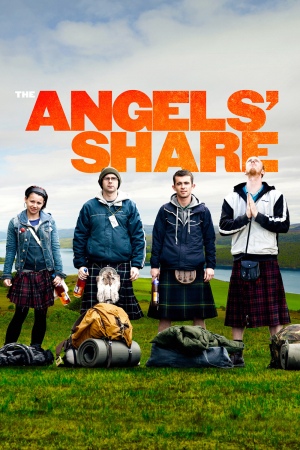 When I saw the previews for Director Ken Loach’s new film, The Angels’ Share, I was concerned about missing out on much of the dialogue. Taking place in Glasgow, Scotland, it is a story that traces the relationships of four loveable losers. While it seemed both caustic and immensely appealing, the thick Scottish brogue kept leaving me thinking that I would be left in the dust.

But if any of you shared my concern, please set it aside. Mr. Loach has many obvious talents, but one is demonstrated by his genius in giving us a madly entertaining English film with sub-titles. In doing so, he has brought us a gift from the cinematic gods.

Frequently profoundly vulgar yet inherently sweet, we are introduced to our four compatriots who have been assigned to lengthy terms of community service following their criminal convictions. It readily appears that they have as little hope as they do desire, and obeying the law seems outside the realm of possibility for all of them.

The movie centers on Robbie, played by Paul Brannigan, a young man with a nasty facial scar that reflects his penchant for brutality. He has done prison time before his community service assignment, and he is immersed in a Scottish version of gang warfare where some relentless thugs haunt his life to get even.

Siobhan Reilly plays Robbie’s girlfriend, Leonie, the fulcrum around which Robbie’s life swirls. While her father despises Robbie and offers him a handsome bribe to simply leave his daughter and move to London, she loves him and wants to give him one more chance. However, having just given birth to their son, she flatly tells him that if he backpedals one more time, she’s gone.

Robbie and the other petty crooks find inspiration from Harry (John Henshaw), who runs the community service program. In particular, he takes Robbie under his wing, and in the process discovers that Robbie has a profound interest as well as surprising talent in the whole process involved in making Scottish whiskey. What follows is a wonderful adventure where Harry takes his beleaguered, troubled students on a group tour of a whiskey distillery.

In the process, Robbie and his new friends decide to attempt a heist of a portion the world’s most expensive whiskey, which will soon be the subject of an auction with tight security. To succeed, they don Scottish kilts in order to infiltrate the auction where the sought after cask of whiskey sells for over 1 million pounds. They stubbornly embrace their chance at finally getting a small pot of gold and crawling out of life’s gutter, in the process transforming crime into an admirable vocation.

This group of four loveable losers are a collection of vulgar foolishness. A young woman named Mo (Jasmine Riggins) is a caustic ally of the group, and she has never come across someone else’s property that wasn’t worth stealing.

While Mo and Robbie have a bit of intelligence, the other two goofballs have little knowledge of anything meaningful. In particular, watch for an hysterical scene where one of the boys is left questioning, “Who in the hell is Mona Lisa?”.

This is really a film about very good people who have gone very bad, and you are left wondering if there is any chance of them earning a bit of respectability. Those of us who have spent our life as criminal defense lawyers recognize everyone of this struggling gang, and they are simply trying to find a way to gain access to life’s Yellow Brick Road and pursue some meaningful rainbow at its end.

Besides The Angels’ Share, the only other English film that I recall having sub-titles was Danny Boyle’s Trainspotting (1996). Both films are filled with moments of delicious venom, and the sub-titles allow viewers to not miss a beat.

Finally, the cinematography occasionally provides a view of the stunning Scottish highlands, and it reminded me of the beauty of one of my favorite films, Local Hero (1983). Starring Burt Lancaster in a supporting role, it dealt with an American oil company trying to buy a small Scottish town on an inlet for the purpose of building a refinery. Some of the best scenes in that film also involved the love of Scottish alcohol in any form, and The Angels’ Share provides us with a beautiful reminder of its wondrous charm.

← No
The Place Beyond the Pines →