Rating: Even an average Danny Boyle film is worth seeing either in the theater or at home. You never really know where anyone stands, and it completely captures you from the beginning, like it or not. 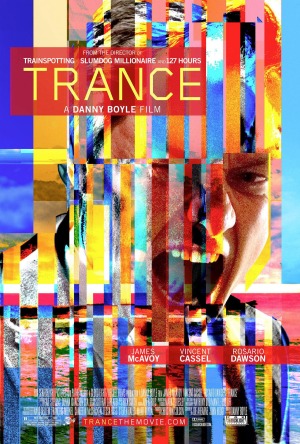 The only honest way to describe Director Danny Boyle’s latest film, Trance, is to say that it is an hypnotic film centering on hypnosis. While there is a certain irony flowing from the fact that it is at times as mystifying as Oblivion, any meaningful comparison stops there.

This is a film that takes the viewer down multiple cinematic alleys that at times are full of mystery. The plot centers on a group of thieves who mastermind a robbery of a classic painting for sale at an art auction. In the process, they get double crossed by the art auctioneer, who intended on pilfering the painting himself. After beating him nearly senseless as they escape, they subsequently are forced to kidnap and torture him to find the painting.

While the plot may sound simplistic, it quickly evolves into emotional turmoil. The art auctioneer, played splendidly by the talented James McAvoy, doesn’t remember what he did with the painting as a result of amnesia stemming from his head injury. The thieves, led by Vincent Cassel in a remarkable performance, finally are forced to embrace hypnosis as their only possible hope. The hypnotist brought into the picture is the sultry Rosario Dawson, and the plot explodes as our actors quickly become as confused as the audience.

Ms. Dawson is flat-out spectacular as a hypnotist with her own diabolical plans. It quickly becomes obvious that this is not the first time she has met the brain-damaged McAvoy, and she is clearly one hypnotist who is as intellectually powerful as she is physically stunning.

All of the principal characters in the film are thieves with an emotional edge, and you can’t trust any of them. Somebody is going to live and somebody is going to die, and that stolen painting will go to the last man or woman standing.

Mr. Boyle spins a web of mystery that leaves you feeling that you may end up as one of its victims. Though this resembles one of his lesser films like the sci-fi adventure Sunshine (2007), it still amounts to a cinematic pay raise for you movie goers.

Remember how his 28 Days Later (2002) helped breathe life back into zombie films that is still being felt today? Do you recall how Millions (2004) was a unique movie about young boys putting their lives in peril after discovering a large sack of money hunted by a killer gang? And of course there is 127 Hours (2010), which found a way to earn James Franco an Oscar nomination for Best Actor.

No, Trance will not be listed in the same category as his classic Slumdog Millionaire (2008), but it still will challenge your senses, both intellectually and emotionally. And did I say that Rosario Dawson is seen sexually seducing both McAvoy and Cassel?