When you are asked by a friend for your opinion on this film, you are likely to respond in words to the effect, “I don’t know if I found it really entertaining, but I was strangely attracted to it.”

Rating: Since it has disappeared from the screen here in Indianapolis and probably everywhere else, hunt it down on a screen at home. At the very worst you will be singing the praises of Elle Fanning. 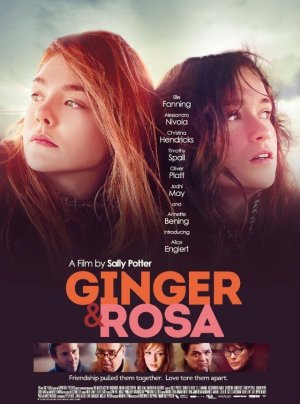 Director Sally Potter has brought us a film in Ginger & Rosa that centers on young girls and yet is likely to appeal to women of all ages. It’s about youth, dysfunctional families and the status of women in the early 1960’s during the convoluted drama caused by the Cuban Missile Crisis. In other words, it is about life in all of its agonizing permutations.

Ginger and Rosa are 17-year old girls played by Elle Fanning and Alice Englert. Their mothers shared agonizing labor contractions in 1945 while learning of the bombing of Hiroshima. At the time, the labor pains seemed comparable.

The movie catapults to 1962, when both girls are high school students in London, England, who share every possible thought and interest. Rosa’s (Ms. Englert) father has walked out on his family, while Ginger’s dad seems far more interested in social concerns than his wife and daughter. Despite the fact that both young women look for joy and adventure wherever it can be found, they suddenly find themselves living in a world that may literally come to an atomic end.

In the process, Ginger gradually becomes alienated from her mother, a former artist lost in depression, while Rosa emerges from puberty with an eye on Ginger’s less than devoted father. Both girls are forced to confront the world as it exists while contemplating their future. Ginger becomes emotionally more attached to a father who basically lives by the philosophy of “make love, not war “, while Rosa simply is attracted to making love with the same man.

Again, while I truly liked this film, I couldn’t help but feel that it functions as more of a “girls night out”. While some guys are likeable, most are selfish to the point of conceit. Wondering if the death of mankind is imminent should nuclear war manifest itself as a result the conflict centering on a small Carribean Island, Ginger and Rosa are left to define their own definition of femininity. It doesn’t help that they are given few meaningful clues.

While Ms. Englert is wonderful, the movie belongs to a spectacular performance from Elle Fanning as Ginger. She is cute, effervescent and profoundly emotional. There are remarkable scenes where she goes from laughter to tears, and I strongly believe that most female viewers will be left wrestling with their own definition of being 17 years old.

Despite the fact that Ms. Fanning is only 14 years old, she has already demonstrated considerable talent in various films. She was spectacular in Director J.J. Abrams wonderful alien drama, Super 8 (2011), and helped bring We Bought a Zoo (2011) to an artistic level that seemed impossible.

Additionally, there are some wonderful small performances by some splendid actors. Timothy Spall and Oliver Platt play Ginger’s gay godfathers, and they try to provide some meaningful advice whenever possible. Additionally, Annette Bening appears as their friend and colleague, and she embraces the image of a smart, working-class woman who long ago lost her beauty in life’s rear-view mirror.

Finally, Christina Hendricks and Allesandro Nivola play Ginger’s estranged parents, and they both are wonderful dealing with a life that is gradually unraveling. Ms. Hendricks, who most of you will quickly recognize from TV’s “Mad Men”, plays a loving mother who has given up her artistic career long ago for a husband who proceeded to give her up. Mr. Nivola is that husband, and he is dedicated to an existential philosophy that shields him from condemnation.

Ginger & Rosa is not a film for everyone. Yet even if you try to stay detached, it succeeds in touching raw nerves that gradually embroils you in its cinematic web.