Director Singer’s film has already been unfairly dismissed as a lost cause. It’s actually a fun ride, particularly if you can coax a teenager to see it with you.

Rating: Should be seen on the big screen to do justice to the special effects. At least then you can discover why most viewers have given it a recommendation upon leaving. 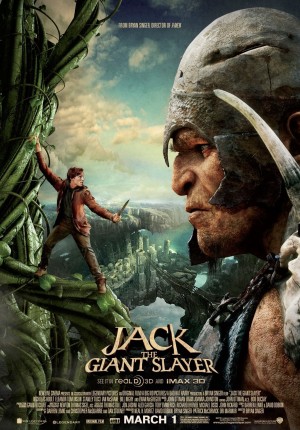 Say what you want about 14-year old boys, but they shine when they function as an unashamed movie companion for films like Jack the Giant Slayer. Again, I am speaking of my 14-year old grandson, Connor, who shares my enthusiasm for mythological action films.

Though I will readily acknowledge that he is a superior student with athletic talent ranging from golf to soccer to basketball, I’m as big a kid as he is when it comes to these type of films. More importantly, he demands something more compelling than pedestrian throw-away films like the Twilight series, and I have learned to appreciate his reactions.

The irony is that while he truly liked both Jack the Giant Slayer and this year’s Warm Bodies, both starred Nicholas Hoult in the lead role. In Warm Bodies, he was a struggling zombie falling madly in love with a human girl, and here he is a poor farm boy attracted to a young princess who is about to become a queen. Dead man walking or a lad who tills the soil, the kid knows how to get ahead in life.

Jack the Giant Slayer tells a story that we all know, but does so with some splendid acting and superior special effects. Some real nasty giants live in the world between Earth and Heaven, and the young princess, played effectively by Eleanor Tomlinson, finds herself whisked into their world by an uncaring beanstalk. Jack joins a group of soldiers from the realm to climb the stalk to rescue her, and the ensuing adventure becomes far more exciting than critics dare acknowledge.

Fundamentally, the film is enormously helped by performances from Ian McShane, Stanley Tucci and Ewan McGregor. In his small role as the kind King, you are left hoping that Mr. McShane could express his agony over his missing daughter in the extraordinarily foul language of his memorable character in TV’s Deadwood (2006-2009). God I miss Al Swearengen.

Mr. Tucci appears here as the selected betrothed of the horrified young princess, though he has an idiotic plan to put power ahead of sex with the help of the gnarly giants. Mr. Tucci is a stitch as the gap-toothed villain with a head of hair that makes him look like a human mop, and he again demonstrates his wide acting range as recently seen in last year’s The Hunger Games.

Mr. McGregor is always sensational, and he serves as the King’s emissary with both cunning and a delightful twinkle in his eye. Regardless, if you’re not up to seeing this film, hunt him down in Beginners (2010), Salmon Fishing in the Yemen (2011) and last year’s The Impossible.

The giants are a collection of truly ugly monsters, led by the great Bill Nighy. Playing General Fallon, he is cursed with two heads and an attitude that Satan himself would admire. Though the character is profoundly hateful, you can’t help but love Mr. Nighy when you recall his last role as the suffering husband in the spectacular The Best Exotic Marigold Hotel.

Finally, what shouldn’t be missed is the desire of the princess to escape her castle to seek adventure. Importantly, she simply believed that it would allow her to run her kingdom with an eye to improving the lives of her subjects.

As I watched this film, I couldn’t help but think that the politicians in Washington today, particularly the Republicans, would benefit from seeing this movie. More particularly, how can we profess to hate our government when we are our government? How can we accept the consequences of the sequester when it is the people on the bottom of the ladder who will suffer the most?

Good Lord, are politicians allowed to defend the sequester simply because it won’t affect their wallet? Maybe they should follow the advice of the princess and seek an adventure outside of Washington. Who knows, maybe they could find a way to dedicate themselves to leading in a fashion that actually helps their subjects, today known as citizens.

One thought on “Jack the Giant Slayer”