This is a radiant film that blends intelligence, sex and power. Good guys may die hard, but it still amounts to a noble ride.

Rating: See it on a big screen, as it is as visually beautiful as this year’s Anna Karenina, only it is far superior. Remember, it is a Danish film with English subtitles. 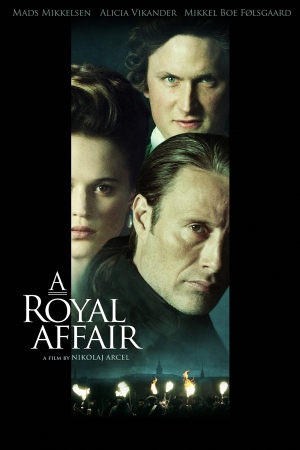 A Royal Affair is a magnificent film that is wonderfully intriguing on various levels. Based on a true story, it swirls around the marriage of Caroline Mathilde, a young English woman betrothed to marry a Danish King, Christian VII, whom she has never met. To make matters worse, he is borderline insane, a manic-depressive long before that was a diagnosed mental illness capable of being treated.

To help control the mad king, representatives of the National Council sought to appoint Johann Friedrich Struensee, a German doctor with liberal leanings, to try to control him. What follows was the unanticipated strength of the film, namely a lunatic king who finds a path to sanity. Following the advice of his wife and doctor, he sets out to reform his medieval country by embracing the influences of the powerful Enlightenment Movement that was sweeping across Europe at the time.

At its heart, A Royal Affair serves to remind all of us of powerful historical lessons. Like many countries in the 1760’s through 1790’s, a period of time where we were fighting a Revolutionary War in our own country, Europe was trying to embrace the writings of Locke, Voltaire and Rousseau. Before that time, countries were largely led by reactionary noblemen and religious leaders.

The common man and woman were little more than peasants and serfs living at the complete discretion of these leaders. This film deals with the expected turmoil surrounding simple change.

For example, when King Christian and his wife sought to provide open small pox inoculation to the general public as well as expanded availability of sewers, noblemen screamed that the country couldn’t afford it. They preferred to accept their generous rewards from the government, and they saw little need to care for the working class of their country.

Although there is a cast of wonderful performers, three stand out for recognition. Mikiel Boe Falsgaard plays Christian VII, and you end up rooting for him as he seeks a way to outrun his profound weaknesses. He is in many ways a fool who belatedly discovers a conscience, but he is simply not bold enough to proceed on his own.

Alicia Vikander plays his young queen, and she is soon recognized as a student of the Enlightenment. While she quickly grows to hate her husband for his seemingly mindless excesses, she eventually decides to help him when the king welcomes the meaning of Voltaire’s writings even though he lacks the ability to read them.

And then there is the dominating performance by Mads Mikkelsen as Dr. Struensee. Also possessing an ardent dedication to Enlightenment principles, he simultaneously brings Denmark to the brink of a reawakening as his love for the queen points to their eventual destruction.

Mikkelsen is superb as an intelligent foreign doctor willing to challenge Danish authoritarians who simply seek to preserve the status quo. He has secretly produced his own progressive writings, which leads to winning the queen’s heart.

Mr. Mikkelsen is an accomplished actor, and see if you don’t join his admirers once you take a second look at the first Bond film starring Daniel Craig, Casino Royale (2006). In that he plays a vicious villain, and he is profoundly stylish in doing so.

A Royal Affair, directed by Nikolaj Arcel, has been nominated this year for an Oscar as Best Foreign Film. It is a film where social progress is wrapped in sexual intrigue, and in many ways reminded me of the great biography entitled “Catherine the Great: Portrait of a Woman” by Robert K. Massie.

Catherine was elevated to her position as Empress of Russia at the same time that King Christian VII was in power in Denmark, and she was as dedicated to progress in her country as was Queen Caroline. She was also an empress who hated her mentally challenged husband, and her first three children that she was raising as Empress were fathered by three different men. Love or hate these women, neither suffered from an itch that they couldn’t scratch.

One of the reasons I truly love films is their subtle way of having meaning in today’s world. Like it or not, we Americans are presently fighting some of the same battles that were going on in Denmark in the 1760’s.

No, today we call the well-to-do “capitalists” instead of wealthy “noblemen”. Agree or not, while a majority of people in our country are trying to find ways to protect Social Security, Medicare and provide affordable health insurance, these causes are being aggressively fought by a well-heeled crowd seeking to protect our modern day noblemen from having their taxes raised further.

But we shouldn’t stop there. Just like in the 18th century, we have a powerful church, the Catholic Church, again run solely by men. While you can see from tragic developments in Los Angeles that this is the very church that tried to hide the pedophile scandal involving many of its priests, they now take a public stand that would urge that the government be effectively stopped in the attempt to provide affordable contraceptives to all women.

Let me be clear that I in no way mean to throw a blanket condemnation on the public sector in today’s America, much less a Church that is doing some wonderful work in multiple areas. However, their attempts to deny the working class people of this country affordable medical care is no different than what you see in A Royal Affair where their European ancestors attempted to deny peasants and serfs access to free vaccinations.

Again, this is why the meaning of some films extend beyond simple entertainment. Dismiss my analogy if you like, but the government sought by King Christian VII, his wife and doctor was one that was aimed at primarily helping the little guy have a decent shot in life.

Political selfishness was as condemnable in Denmark in the 18th century as it is in America today. To argue that 47% of Americans are simply “takers” amounts to nothing more than Marie Antoinette famously dismissing the starving rabble with the phrase, “Let them eat cake.”;

As A Royal Affair demonstrates, we have come a long way. But wouldn’t Voltaire feel that we have a long way to go?