Abandon all hope ye who enter. 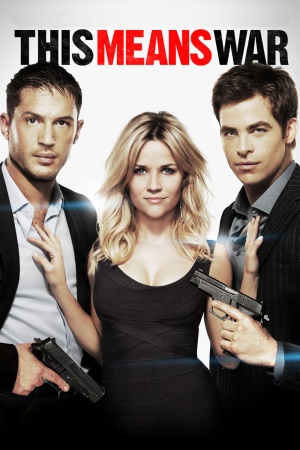 After watching This Means War over the St. Valentine’s holiday week, I could readily re-imagine why the Chicago mob chose this time of year to conduct their memorable massacre decades ago. If this film is supposed to symbolize a national romantic holiday, why wouldn’t we all welcome death at the point of a handgun?

With apologies to my daughter-in-law, who actually confessed to liking this gigantic mess, This Means War occasionally touches identifiable emotions while doing little more than exploiting them. Put another way, you might as well try to deny women contraceptives while urging men to get vasectomies as to extol the virtues of this unfortunate movie. Like it or not, I suspect that you will be left with little more than a profound sense of self-loathing after leaving the movie theater.

On the other hand, I must readily admit that I heard the audience laughing out loud at various times during the course of the film. The idiotic battle between Chris Pine and Tom Hardy, two CIA agents who reduce the Constitution to a nullity as they battle with each other for the love of Reese Witherspoon, produces occasional moments of undeniable fun. However, even if you find a way to ignore the repeated violations of the legal ethics at the center of their governmental profession, they eventually reduce themselves to little more than the profane fools found every weekend in various upscale bars around this country.

The irony may be found in the fact that they are not only both handsome guys, but they have previously proven that they are also good actors. Mr. Pine was certainly serviceable while starring with Denzel Washington in Unstoppable (2010), and was memorable as Captain Kirk in the Star Trek Prequel (2009). As to Mr. Hardy, you really don’t need to look any further than Inception (2010) or last year’s Warrior or Tinker Tailor Soldier Spy.

Unfortunately, here they are little more than juvenile idiots. But even that catastrophic observation helps the audience overlook what has to be the worst performance of Reese Witherspoon’s career. Dressed constantly in short skirts and 6 inch heels, she would have you believe that she is a woman lacking the slightest ability to attract a semi-normal man. It is painful to watch at every turn, pure and simple.

On top of that is the performance of Chelsea Handler, playing Ms. Witherspoon’s bitchy friend who is full of amateurish advice. While I must admit that Ms. Handler proves to be both occasionally foul and funny, her basic contribution is to cause you to contemplate the disturbing thought that you may have abandoned your self-respect at the ticket counter.

But even if the movie proved semi-enjoyable on the simplistic basis of watching the boys duel over Witherspoon, it collapses in undeniable chaos as you observe their violent activities chasing an international villain. They kill and maim with little concern for anyone, and the scene where they destroy an upscale restaurant fighting each other over Witherspoon should qualify as possibly the worst action sequence in any film to be released in 2012.

After all, there is no denying that the film left me with the haunting memory of the song by Joan Jett, I Hate Myself for Loving You!