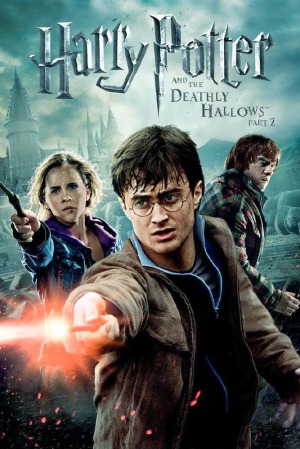 Let’s start with a little movie trivia. Counting this wonderfully satisfying conclusion to the fascinating Harry Potter movie series, how many Academy Award nominations have these films received, and which ones have they won? Put your thinking caps on, and the answers appear at the conclusion of this review.

The Harry Potter films transcend the simple enjoyment of viewing them, although they have admittedly provided a fun joyride at every turn. Indeed, it is not an exaggeration to say that they collectively define a unique movie going experience.

Every actor, and I do mean every actor, from the kids to the professors at Hogwarts to Ralph Fiennes as the malevolent Lord Voldemort have molded their talents to form an acting ensemble that is truly only rivaled by Peter Jackson’s magical The Lord of the Rings trilogy. The late Richard Harris and then Michael Gambon were pitch perfect as the wise and kindly Dumbledore.

Could anyone have played the complicated Severus Snape better than the brilliant Alan Rickman, who is the only person on God’s acting earth who could pronounce the name Harry Potter and make it seem like it actually had eight syllables?

The legendary Maggie Smith’s Professor Minerva McGonagal might have been flustered at times, but she never wavered in her dedication to her endangered wards. And while the list goes on and on, one of the great attributes of this cinematic series was the fact the best British actors in the business were willing to take on roles large and small.

This includes the large group of villains led by the aforementioned Mr. Fiennes. As the snake-nosed Voldemort, he scared the living crap out of everyone from the time he first materialized. Jason Isaac was deliciously slimy as Lucius Malfoy, as was Tom Felton as his toady son Draco. And as outrageously horrid as Helena Bonham Carter was as the delightfully deranged Bellatrix Lestrange, maybe one shouldn’t really overly praise her. After all, didn’t her Miss Lestrange look far more presentable on screen than Ms. Bonham Carter did at last year’s Oscar ceremony?

And while this is clearly not a novel observation, never in the history of film has the viewing audience been treated to the wonderful spectacle of watching three child actors literally grow up on the screen to become such accomplished adult performers as was the case with Mr. Radcliffe, Ms. Watson and Mr. Grint. They began as wild-eyed children and ended up hand-in-hand risking life and limb to conquer Harry’s sworn nemesis. It was at all times a moving spectacle, and I am sure I’m not the only one who felt a bit of wistfulness saying goodbye to them.

But as with life, all good things must come to an end, and the Deathly Hallows, Part 2 does it in grand style. The special effects need to be seen to be believed, particularly Voldemort’s malicious legions as they attempt to bombard and grind Hogwarts into dust.

Additionally, the climactic battle between Harry and Voldemort, while not quite rivaling the heartbreaking consequences of Frodo’s quest to destroy the evil ring in the fires of Mount Doom (i.e., Lord of the Rings finale), I doubt that it will leave anyone leaving the theater feeling shortchanged.

While I must admit that I have never read of any of Ms. Rowling’s books in this series, I have become a devoted fan of the films. Though it has admittedly left me occasionally confused about some of the sub-plots, it never once interfered with the singular enjoyment of watching each film with an increased sense of awe. Even if some of you film fans have missed either some or most of the Potter movies, you shouldn’t be hesitant to dive in at any level, as each stands on its own as superb movie making.

Clearly, the glue that bound together these movies as true works of art were the gifted directors whose talents breathed life into Ms. Rowling’s literary prose. From Chris Columbus through Dave Yates, accomplished directors were guiding accomplished actors through a story of historical scope, and I have no doubt that the artistic quality of the Potter movies will stand the test of time.

As to my initial question concerning which of the Harry Potter films has won an Oscar, the answer is none of them. Four have been nominated in various categories, namely Sorcerer’s Stone (2001); Prisoner of Azkaban (2004); Goblet of Fire (2005); and Half-Blood Prince (2009).

While I may be thinking more with my heart than my head, I can’t help but think that Deathly Hallows, Part 2 may very well end that incredible streak. It would not surprise me one bit to see it nominated not only for best picture, but also for art direction, costumes, cinematography and score. It is that good, it is that deserving and it would be a most fitting way to honor this franchise in much the same way that the finale to the Lord of the Rings, namely Return of the King, rightfully dominated the Oscars in 2008.

Rest in peace, Harry. You are an eternal gift to future generations of movie fans across the globe.