Though this is not a great documentary, it does serve to remind you of the historical significance of Elvis Presley. 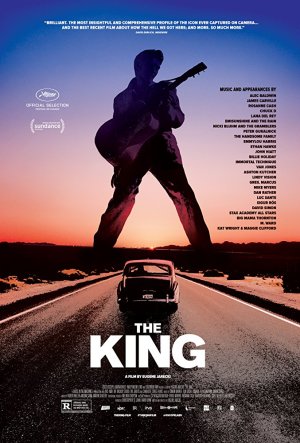 While The King, directed by Eugene Jarecki, died quickly at the box office, it is a rather intriguing biography centering on the rise and eventual destruction of Elvis Presley.  The entire film uses Elvis’s 1963 Rolls-Royce as it journeys from the place of his birth in Tupelo, Mississippi in 1935 to his tragic death in 1977 at the age of 42.

As it follows the rise and fall of Elvis, director Jeracki turns his camera to today’s homeland where in many ways the American dream has died.  When Elvis first became popular in 1954, our country was awash in hope as many post-World War II parents worked in factories so that their children would eventually be able to attend college and pursue a career.  That dream has greatly disappeared in today’s United States where factories have closed down and college students have been forced to assume massive personal debt.

In Elvis’s case, he was a single child who gained fame with few close friends.  Falling under the sinister guidance of Colonel Tom Parker, his great popularity as a singer eventually died when he first fell in love with Hollywood and then Las Vegas.  As most of you know, he made many God-awful films only to follow it up by performing in Las Vegas where he became addicted to various forms of medication.

Though the film’s analogy to today’s United States becomes a bit stretched at times, it does find a way to capture a bit of Elvis’s magic.  He was one of the first white singers to cross the racial barrier by bringing largely ignored popular music into a white world.  Though it was unintentional, he eventually served to desegregate a portion of America with his powerful voice.  Think for a moment that the song “Hound Dog” was initially written and performed by a black female singer.

No singer or group was able to dominate the American landscape like Elvis until the Beatles arrived in 1963-64.  Unfortunately, he became so popular that even he didn’t understand its consequences.

The film reminds you of Elvis’s first appearance on national television, beginning on the Steve Allen Show and then Ed Sullivan.  There was something extraordinarily sexually provocative about his performances, and the crowds went crazy at any location.

However, when Elvis returned from his two years in the military he completely lost his way.  That is shown by his appearance on the Frank Sinatra show where he sang with the hosts, Peter Lawford and Sammy Davis, Jr.  He was obviously consumed by the image they projected and it followed with his abandoning road singing engagements for films that are terribly embarrassing to this very day.

Nonetheless, the film does serve to remind you of what Elvis Presley meant to our culture when it shows his comeback live performance on TV in 1968.  Dressed in all black and performing alone on a circular stage surrounded by a small audience, he gave a performance that is still stunning to this very day.

Unfortunately, Elvis became entrapped in Las Vegas where his life involved several hours of daily performances late at night followed by drug use that was no surprise to anyone.  Elvis is gone along with the America that existed at the time, and the promise of life, liberty and the pursuit of happiness is still tragically denied to millions of Americans.

← The Spy Who Dumped Me
BlacKkKlansman →