Watch the ending credits where you’ll see the actual people played out on the screen. It will remind you of the heartwarming moment previously seen in the Queen of Katwe. 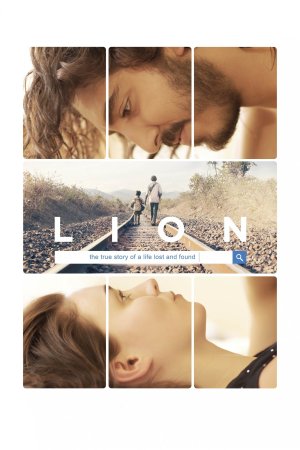 Director Garth Davis’ Lion is a dark, inspirational film based on a true story. As most of you know, a 5-year old boy in India known as Saroo falls asleep on a train as he waits for his older brother, only to wake up as he is transported over a thousand miles away. Alone on the train for several days, he embarks on a frequently horrifying adventure through the streets and alleys of Calcutta.

Thank God Saroo has some spirit and moxie for his age, as he has to repeatedly dodge a large group of sadists who try to capture young children and take them to sinister locations of an unknown nature. He continually is crying out for his mother and brother Guddu, and everything seems hopeless.

But a real life miracle happens when a young man spots him sitting on the street outside of a café, and he is taken to a center that houses an enormous number of homeless children. Thereafter, he is adopted by a kind Australian family and lives the next 25 years in Tasmania.

This movie has a number of wonderful performances, beginning with Sunny Pawar as the young Saroo. However, the very talented Dev Patel plays Saroo as a young adult, and Mr. Patel continues to show a wide range of acting skills as previously demonstrated in this year’s The Man Who Knew Infinity, both Exotic Marigold Hotel films (2012 and 2015) and the tremendous Slum Dog Millionaire (2008).

Though both are given far too little time on the screen, Nicole Kidman and David Wenham give compelling performances as Saroo’s Australian parents. They are an endearing couple, and they have dedicated their life to raising Saroo and another abandoned Indian boy in the hope of giving them decent lives.

While I don’t mean to criticize this film in any way, the darkness tends to overwhelm you as you watch Saroo use the genius of Google Earth to try to retrace his childhood and find his birth family. Having evolved into a young man with an Aussie accent, his relationship with Lucy (Rooney Mara) becomes fractured as he spends nearly every waking moment trying to retrace his past.

However, the strength of the film flows from the fact that no one in Saroo’s position could have lived a balanced life despite the fact of being surrounded by loving, adoptive parents and friends. No matter how remote the odds, he had to find a way to revisit his Indian mother and whoever might still be alive in his family.

The ending involves a heartwarming display of an accomplishment that defied any realistic chance of success, and the movie becomes a prized edition to our 2016 holiday season.