Given the very funny court scene that wraps up a movie devoid of humor, this is a film trial lawyers will love. 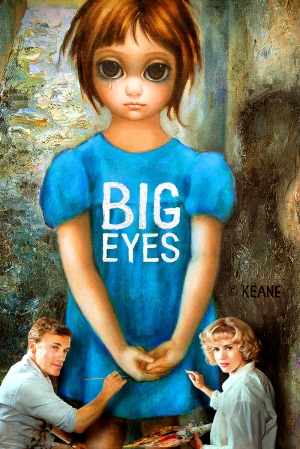 Big Eyes, directed by Tim Burton, is far too one-dimensional to watch and yet too interesting to miss. Based on a true story spanning 1958 through the early 1970’s, it tells the tale of an artistically talented wife forced to live with a husband taking full credit for her paintings.

The hardest part about this film is accepting the reality of a woman‘s role in marriage in the 1950’s. Taking place in San Francisco, Amy Adam’s plays a young artist fleeing quickly with her young daughter from one marriage into another. Recognizing her role as a wife was to be seen and not heard, her husband quickly exploits her by taking full credit as the actual artist of her exceptional paintings. She submits to her husband’s demands, initially seeing the financial reward as beneficial to the entire family. Without saying more, that was a gigantic mistake.

Academy Award Winner Christoph Waltz embraces the role of Walter Keane, Ms. Adams’ husband, at times resembling a slimy, human anaconda. Keeping Ms. Adams confined at home where she produces paintings of young girls with beautiful, big eyes as reflected in the movie’s title, Waltz’s Keane succeeds in promoting them where he gains all the glory.

Despite Ms. Adams meaningful performance, the movie is incredibly hard to endure given her treatment. Her marriage becomes the functional equivalent of an early Guantanamo, and there is no escape. Ms. Adams is left with almost no hope, and you are left feeling the same way.

Quite frankly, the only really powerful moment of the film is a climax where our married couple sue each other in a federal trial in Honolulu. With both of them claiming to be the actual artist of the girls with “Big Eyes”, Mr. Waltz is at his best where he is left defending himself in a manner that reminded me of Woody Allen’s classic performance in Bananas (1971). Allen’s Fielding Mellish was put on probation where the only requirement was to stay out of the Judge’s neighborhood, and Waltz learned that it is a horrible mistake not to accept a continuance offered by the Judge.

← The Imitation Game
Into the Woods →