Wouldn’t it be spectacular if this movie’s title was actually the name of the lead singer for the Russian group “Pussy Riot”! 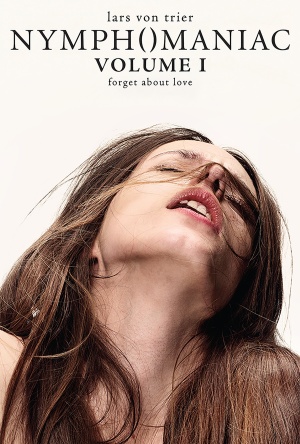 Accompanied by a good friend, who was seeking to avoid the appearance of shame, we went to see Lars von Trier’s Nymphomaniac: Vol. 1. While my male acquaintance was a bit intrigued, he insisted that we sit at least one seat apart to avoid potential controversy. While I thought it was a bit foolish, I had to admit that it did avoid whispers in the crowd.

Having said that, defying all conceivable odds, this film has strengths that will surprise you at every turn. Let’s start with the beginning, where Stellan Skarsgard plays Seligman, a single businessman who discovers a brutally battered young woman lying unconscious in an alley. When she refuses his request to call an ambulance or the police, he assists her to his apartment where at least he can be assured that she can take care of herself.

The entire movie unfolds with the two of them remaining in a single room of his domicile, she lying in bed with him sitting in a chair. When she asks about a fishing lure he has on the wall, he describes it as a nymph that he uses for fly fishing. Responding that she was familiar with the term, she readily admitted to being a nymphomaniac. Drinking tea, her face badly bruised and still bloody, she politely asks, “Do you want to hear my story?”;

Charlotte Gainsbourg is unnervingly seductive as Joe, a nyphomaniac with no apologies. She relates years of her adventures, describing in occasional detail her sexual exploits with men too numerous to count.

Most of the story tracks back to years before when she perfected her craft with a good female friend. Stacy Martin plays young Joe, and she awakens each day hot to trot. Casual sex was profoundly enticing, and when it ended you could almost hear her sneering, “Wham, bam, thank you, man.”

Since this is an X-rated film that requires the viewer to be over 18, let me say that it is at all times brutally pornographic to the extreme. Sexual encounters take place in trains, alleys and bathrooms, and everyone is completely naked. The camera clearly shows that actual sexual encounters are taking place, so let your imagination run completely wild and you will not be surprised.

While the sex is mind-blowing, the only organ of the body that doesn’t get “blown”, the movie is held together by the friendship of Skarsgard and Gainsbourg’ characters. He’ll listen to her stories of sex and she’ll then listen to his stories about his love of music and fly fishing, and you end up developing a bit of a warm feeling for the two of them.

Mr. Skarsgard is a busy actor, and his talent has been demonstrated in numerous films. Think of Dancer in the Dark (2000); Kiss Kiss (Bang Bang) (2001); all three Pirates of the Caribbean films (where he played Bootstrap Bill); Mama Mia (2008); Girl with the Dragon Tattoo (2011) and the Thor films where he played the mentally challenged Erik Selvig (2011 and 2013). Need I say more?

Also, keep in mind that recognized actors like Christian Slater, Shia LaBeouf, Connie Nielsen and Uma Thurman appear in small roles. Slater and Nielsen are Joe’s parents, and both help to explain why Joe turned out the way she did. Slater is really not much of an actor, and I couldn’t help but feel that we will soon see him on the talk circuit describing himself as a “father of the nymphomaniac.”

Mr. LaBeouf plays Jerome, a central figure in Joe’s life. They both enjoy having sex, and Joe wrestles with the possibility that this may be the one person in the world who she truly loves. I won’t give away the answer to that question, though Joe will discover soon enough.

The most spectacular moment in this film involves Uma Thurman, playing Mrs. H, the wife of a renegade husband who is banging Joe. She drags along her three young boys, all under the age of 10, to Joe’s apartment, where she confronts her husband and his nymphomaniac squeeze.

What follows is as outrageously funny as it is spectacularly unnerving. Uma will simply not shut up, finally taking her boys into Joe’s bedroom with the words, “Children, would you like to look at the whore’s bed?”;

So that you are not misled, the movie starts to dissolve when Ms. Thurman steps off screen. The last 20 minutes that involve Skarsgard’s musical background and Gainsbourg’s vivid recollection of the many penises she has seen in her life leave you mumbling, “Oh, good grief, how far under life’s accepted moral radar screen is von Trier going to descend?”;

In describing the conversation between Skarsgard and Gainsbourg, it is also worth noting her unashamed description of her perception of her past. She rejects love as a cancer, finding in it nothing but weakness and perfidity.

On the other hand, the strength of being a nymphomaniac is that in exchange for love you simply revel in lust combined with jealousy. What the hell is wrong with that?

Finally, another unfortunate aspect of the film is that it suddenly ends in mid-scene, leaving you completely wondering who beat Joe nearly senseless. Mr. von Trier is releasing Nymphomaniac: Vol. II, so I’m anxious to see if my above-referred to movie companion has the strength to tell his wife that the two of us have to see how Nymphomaniac ends.

While this will shock no one who knows me, I remain a bit curious.