The only person who could be disappointed by this intriguing movie is Bruce Willis, who must secretly wish he had Joseph Gordon-Levitt’s hair. 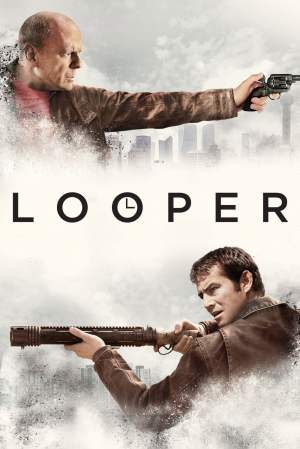 Don’t be misled by the previews, as Looper is a surprisingly entertaining drama for totally unanticipated reasons. Taking place in Kansas in 2044, it centers on a story where alienated young men, known as Loopers, are employed to kill victims sent back from the future via time travel by a controlling mob. It might sound unduly corny on its surface, but it twists you into emotional knots as the plot unfolds.

To begin with, there is a catch to being a Looper, namely facing your intended victim who is actually yourself sent back from 30 years in the future. If you kill him/you, fine, but you must definitively face the consequences that you have 30 years to live.

In the film, Joseph Gordon-Levitt, known simply as Joe, faces that problem when confronting his future self in the person of Bruce Willis, known as, you guessed it, Old Joe. Coming off remarkable contributions in Christopher Nolan’s Inception (2010) and The Dark Knight Rises, Gordon-Levitt is nearly unrecognizable in makeup that causes him to resemble a young Mr. Willis. Let me simply say that Willis escapes Gordon-Levitt’s clutches when he hesitates to kill him, and the two are not very cozy with each other, particularly when Gordon-Levitt learns Willis’ intentions.

Without giving the plot away, Willis’ sole mission was the intent to kill the young man who will evolve into the head of the dreaded mafia organization in the future. He seeks to bring the entire operation to a halt and thereby save the life of his wife, who met a tragic end in his presence. The problem is that Willis has to confront the hard reality that the future crime boss is one of three 10-year-old children, all born in the same hospital on the same day. As horrifying as it sounds, he must tragically execute all three in order to achieve his ends.

As good as Willis and Gordon-Levitt are, there are several supporting performances that steal this film. First and foremost, Emily Blunt appears as a single farmer raising one of the three children in question. She knows her son has mental powers that could lead to evil, but she refuses to abandon him, sensing genuine hope that he will choose to be dedicated to the betterment of mankind. She is tremendous as she harbors Gordon-Levitt as they await the arrival of Willis.

Jeff Daniels and Paul Dano are also delightful, Daniels as the acting head of the mob in 2044. He is bearded, funny and totally deranged, and it’s nice seeing him play a despicable villain. As for Mr. Dano, he is also a Looper who makes a tragic mistake when he lets a designated target, again his older self, flee.

I should point out that violence comes reigning down at all turns in this fine film, as the mob is out to kill the dual personality played by Willis and Gordon-Levitt. But the real controversy continues to center on Ms. Blunt’s young son, and whether saving him justifies the risk to her own life.

Let me also say that young Pierce Gagnon is superb as Cid, the little boy who just wants to be normal. He has horrible issues, but he clearly is not Damien, the Devil’s child in the classic nightmarish horror film, The Omen (1976).

Who must die to save the future? The ending is truly mesmerizing as you dwell on a disturbing but hopeful scene absent any soundtrack. Hunt it down.

← House at the End of the Street
Pitch Perfect →